Up to 8 players must work together to find treasure in a world generated to challenge their specific abilities.Each player can choose between the swordsman, archer, gadgeteer, witch, nurse, vampire, immortal, and bomber. You'll be challenged along the way to the treasures with pu...
-10%
175 руб.
158 руб. 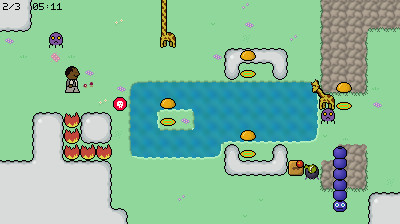 Про гру
: Name надається за допомогою подарунка для Steam аккаунта.
Up to 8 players must work together to find treasure in a world generated to challenge their specific abilities.

Each player can choose between the swordsman, archer, gadgeteer, witch, nurse, vampire, immortal, and bomber. You'll be challenged along the way to the treasures with puzzles tailored to these skills.

The rules of the game are pretty simple. Walk left, right, up, or down, or do the one thing your hero does. One hit kills you, but once dead you keep playing as a ghost. Ghosts can be healed by picking up a heart left by a dead monster, or by the Nurse, or by returning to the beginning.

One screen at a time is visible. When all players have left the screen, play moves on. Most screens contain a distinct puzzle.

With one player it's fun, and with multiple players it's a riot!

The Swordsman
He can swing a sword one tile's length ahead. It kills monsters, and flings certain objects forward.

The Archer
Fire an unlimited number of arrows in a straight line.

The Gadgeteer
He carries a hookshot, which can be used to zoop across rivers, or to bring objects closer.

The Vampire
Vampire can turn into a bat at will, and can easily cross water and step over footswitches.

The Witch
She charges up a magic spell which shields her from monsters, and when discharged it shoots across the room, killing everything in its path.

The Nurse
Strictly non-combatant, the Nurse shoots hearts at other players to heal them if they die.

The Bomber
He can drop an unlimited number of bombs. This is very helpful for solving the kind of problems that can be solved by explosion.

The Immortal
The mysterious Immortal can run faster than the others and can't be hurt by monsters. Only one force on Earth can kill him...
Відгуки про гру
У цю гру поки відкликання ще немає жодного.